A lot of hard work and conviction helped us reach the success we now have, one year after launching Colab.re in March 2013. Looking back, it’s amazing to see that our central idea of creating better cities for citizens, with citizens, is increasingly becoming a reality.

When we began our research during the 2012 municipal election campaign in Brazil, we felt positive about the behavioral trend of citizens demanding more participation. Then, we witnessed citizens coming out onto the streets of Brazilian cities in June 2013. However, we were not yet certain whether city halls were willing or ready to adopt a transparent and collaborative approach towards citizens. Now, we are glad to see mayors spontaneously asking for our solutions.

Now, we are glad to see mayors spontaneously asking for our solutions.

Colab.re won last year’s AppMyCity contest after we demonstrated how our app focuses on the citizen and on human behavior. The final step of the contest involved presenting our app at the New Cities Summit in São Paulo. We had PublicStuff, from the US, and BuzzJourney, from Israel, as finalists with us. During the event, we had the opportunity to meet many thought leaders from all over the world, and after several debates and conversations, we were certain that we were moving in the right direction. We knew for sure that our motivation, passion and focus would lead to many happy moments in the future.

After winning the prize, our lives completely changed. 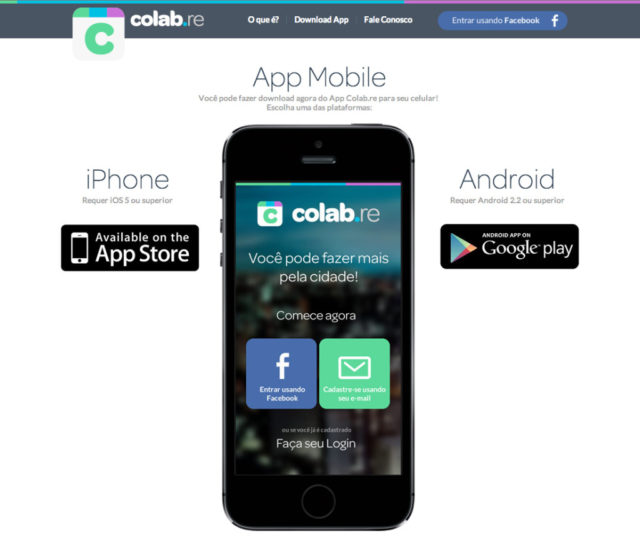 After winning the prize, our lives completely changed. We were contacted by every major city and government throughout the country. We travelled a lot to present Colab.re and to participate in debates that are now transforming the relationship between government and citizens. We managed to update and fully refresh our apps for both iOS and Android to better serve citizens; we created a more complete dashboard for city halls, social movements, NGOs, enterprises, etc, where they can manage citizens’ requests, proposals and evaluations of public services, interacting with them; and we raised money.

With the investments we are receiving, we intend to improve our product – both web platform, apps and dashboard – and start developing an area of intelligence generation through big data. We also aim to expand our marketing efforts to the offline media. In Brazil, it’s extremely important to democratically reach citizens of every social class, including those who have limited access to technology.

Now, we have Curitiba – Brazil’s seventh biggest city, capital of the state of Parana and considered the most modern and technology-friendly city in country – as our client. Curitiba will use Colab.re as their official digital communications channel between citizens and city hall. The news was so amazing, it was hard for us to believe what we had just achieved when they said, “Let’s do it.” Alongside Curitiba, we have two other state capitals and smaller cities across the country confirmed to come on board, and several other cities in the pipeline.

For 2014, we plan to develop internationally. The New Cities Summit in Dallas will play an important role in our strategy to better understand the needs of urban-dwellers abroad. We’re looking forward to it and we’re very excited for our future.

Bruno Aracaty is co-founder at Colab.re, a social network for citizenship and winner of the 2013 AppMyCity! contest. Bruno holds an undergraduate degree in Business Administration and a post-graduate degree in Finance, specializing in Venture Capital, from UC Berkeley – Haas School of Business. Bruno has been a CFA charterholder since October 2012.