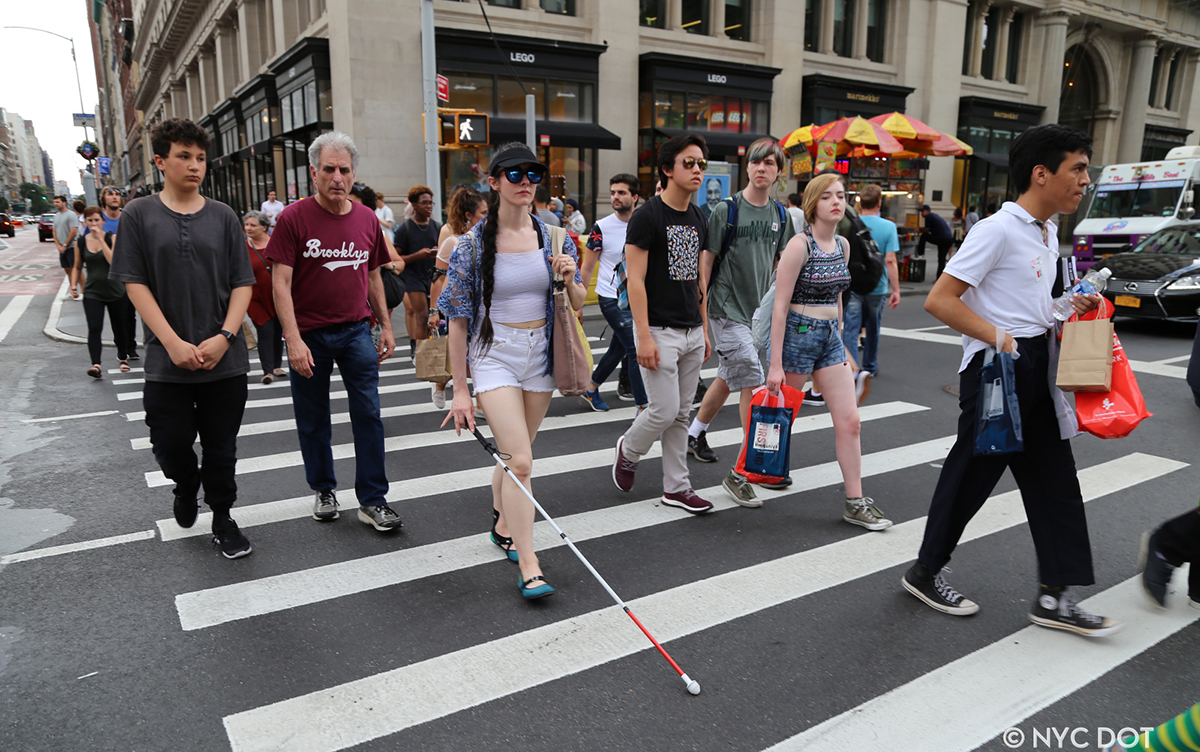 Urban spaces around the world are being flooded with public amenities at an unbelievable speed. Since its roll-out in 2012, New York City’s uniform public bench program, CityBench, has installed over 1,900 benches upon requests from communities throughout its five boroughs. In a similar fashion, the streets of Paris, London, and Amsterdam have seen new permanent structures such as electric vehicle charging stations, interactive totems displaying animated advertisements and real-time passenger information, and an ever-growing number of bikeshare stations and bike racks.

There is no dispute that these amenities improve the quality of services rendered to the public, but the benefits are not equally distributed amongst all pedestrians. One population in particular, low-vision and blind pedestrians, would suggest that these amenities have become an obstacle for them to circumvent as they walk the paths they once knew so well.

The concept of “smart cities for all” is not reached by developing operations that can communicate to an individual’s smartphone. The very essence of the concept is that no user gets left behind. Don’t get me wrong, I am also an advocate for the increased number of amenities that we are seeing on the streets today. My discontent with many of them lies in their roll-out. The arrival of these structures appear to happen overnight with little to no alert to vulnerable pedestrians. This is concerning because any orientation and mobility instructor would agree that the center of any comfort and security for a low-vision and or blind pedestrian comes from understanding their path, from anticipating the known obstructions that they’ll encounter as they navigate the street environment.

When I think of cities that are leading the way on “smart cities for all” I think of London and my hometown, New York City. As a response to local requirements for residents’ approval of public projects, London local authorities have shifted the mediums by which they interact with their residents. Mobile communications has become one of their primary vehicles to engage with the public and solicit feedback. Their mobile applications are built with what I’ll refer to as “virtual curb-cuts” or accessible platforms that enable all members of the public to have a voice and active participation with municipal agencies from the comfort of their home or office, on their time. In a similar function, New York City, especially the Department of Transportation continues to engage in person with niche communities, such as the 900,000+ New Yorkers with disabilities and the organizations that represent them. This is accomplished by keeping track of those organizations and maintaining a relationship with them and their clients.

The task of driving inclusive cities can seem obtuse and tough to address, but cross-sector collaborations allow for progressive solutions to become a reality. This can be seen in New York City with the replacement of payphone systems. By partnering with Intersection, the city will be replacing nearly 7,500 payphones with interactive, state-of-the-art LinkNYC totems that not only allow free calls nationwide, but also advertising, phone charging capacity, free WiFi internet. These kiosks are also fully accessible. The totems are imbedded with beacon technologies that can be used to create a wayfinding navigation network throughout the city. Collaborations like these will enable cities around the world to have the opportunity to join the ranks of New York and London in not only discussing “smart cities for all” but being active participants in the changes to come.