The American Society of Civil Engineers publishes a report every four years that assesses the state of infrastructure in America. In 2017, American infrastructure scored a D+. This reflects both an ever-growing backlog of deferred maintenance and the inability to invest in much needed improvements. In terms of the financial impact, this amounts to nearly 4 trillion dollars, which is more than 20% of US GDP.

Layered on top of this is the ever-increasing impact of climate change. In 2017 alone, the US experienced well over $300 billion dollars of damages that were a direct result of climate. Since 1980, the US has experienced more than 1.5 trillion of weather-based impacts. This results in monies being diverted to reactive, recovery efforts, and less that is made available for strategic development. In short, the endgame is defined by lost opportunities and not growth.

The challenge becomes how to build our way towards a more sustainable and resilient infrastructure system. How do we modify the investment scheme to encourage consideration of long-term, resilient infrastructure? What are the current barriers and how might we reconsider our approach to incentivize investment in more resilient systems? The following is a primer to spur those discussions.

One of the primary barriers to investment in resilience is the fact that risk is often understated. Understated risk means that resilience itself becomes fundamentally undervalued. An example of this can be found in how the insurance industry has traditionally assessed flooding risk. An asset’s risk of flooding is calculated for that particular year, then reset. However, if that risk was assessed cumulatively, let’s say over 50 years, that 1% chance of flooding translates into a 39% chance of flooding over the life cycle of the asset. An owner’s overall perception of risk and motivation to act would likely change significantly if risk were considered in this way.

Another challenge is an understanding of who actually owns that risk and how much of it may or may not be subsidized by other public agencies or insurance. This lack of clarity fundamentally undermines the sense of relevancy and personal investment. However, recently proposed federal legislation has started to introduce the concept of proactively identifying and reducing some of those vulnerabilities, or risk a reduced payout from FEMA following a natural disaster. In the larger market, both Moody’s and Standard & Poor’s are starting to consider how climate preparedness (or lack thereof) may influence a city’s overall bond rating. Finally, the Task Force on Climate Disclosure is providing guidance to private entities to disclose their risks to climate change – not only with respect to emissions, but with a much more focused approach to physical adaptation and preparedness considerations. In fact, some are predicting that these disclosures may become mandatory, much in the same way that entities must now disclose their pension liabilities.

Although often used interchangeably, there is an important difference between funding and financing. While financing focuses on how the “deal will be brokered” (e.g. will it be a long-term loan, with what type of interest rate, etc.) funding focuses on what monies will be used to pay back that debt. There is a plethora of financing options that readily exist to broker infrastructure investments. However, the challenge is to solve for the revenue stream that must be generated to pay back that debt.

Funding can be raised in many ways including tolls, taxes, availability payments and user fees. However, exacting these revenues is much more about making a convincing argument about the overall value of that benefit and, in the end, the return on investment for those that are paying into the system. Funding is essentially tied to society’s perceived value of a resource or service. Value is an inherently subjective measure – and it is not always rational. We just need to look at how water, an essential live-giving resource is priced (or valued) in relation to other non-essential resources.

This is where governance comes in. Governance plays a significant role in how that value is captured and monetized at a societal level. It is the linchpin to many of these funding challenges and must be addressed at the same time as we solve for the technical and economic challenges of investment in resilience. 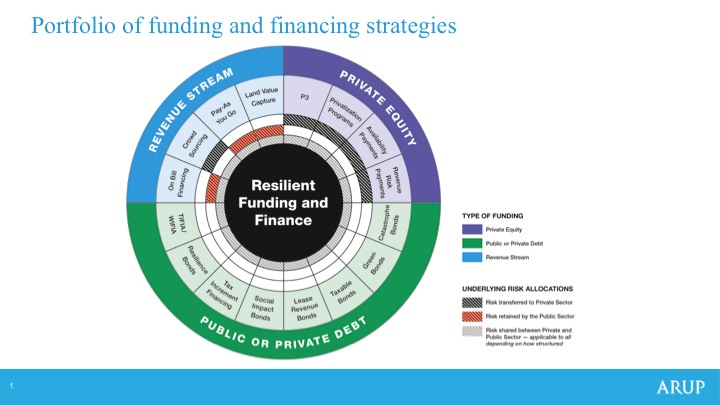 Finally, there is a widely held sentiment that there is insufficient funding to address the lack of resilience in our infrastructure systems. However, there is a competing school of thought which argues that public entities – cities, in particular – have sufficient revenue at their disposal to solve for all of this. The issue is more of how that revenue is captured and distributed and not about whether it even exists. In their book on The Public Wealth of Cities, authors Dag Detter and Stefan Folster argue that American cities have sufficient wealth within their jurisdictions. In their estimation, cities own 90% of the GDP (approximately 15 trillion dollars) – greatly exceeding the current $3.7 trillion in municipal debt. Examples of Singapore’s and Hong Kong’s urban wealth funds are used to illustrate how similar structures could be translated in the US. The key is to optimize the underperforming utilities and real estate holdings, while at the same time shifting attention from short-term spending to investments that are focused on improving the quality of life. If these public assets were managed in such a way, the authors argue that a city could easily generate a net yield of 3% or more to solve for other issues. In their assessment, the primary barrier to enacting this is governance.

Director of Resilience for the Americas, ARUP