There is only one landlord in the United States that is spending over a billion dollars on resilience measures on multi-family buildings: the New York City Housing Authority (NYCHA). The Authority is rebuilding and protecting buildings – some almost 70 years old – against storm surge and sea level rise.

In the aftermath of Superstorm Sandy, with 33 of its 328 developments severely damaged, NYCHA did what no housing authority before it had been able to do. Instead of tearing down affordable housing critical to the city or vacating first-floor apartments and losing hundreds of units that are a lifeline to families, NYCHA took the hard route. NYCHA fought for a record $3 billion grant – the largest single grant in FEMA’s history and the largest federal investment in public housing since its inception. With these resources, the Authority took a site-by-site and building-by-building approach to design. This undertaking also required the latest thinking in structural reinforcement and infrastructure protection. 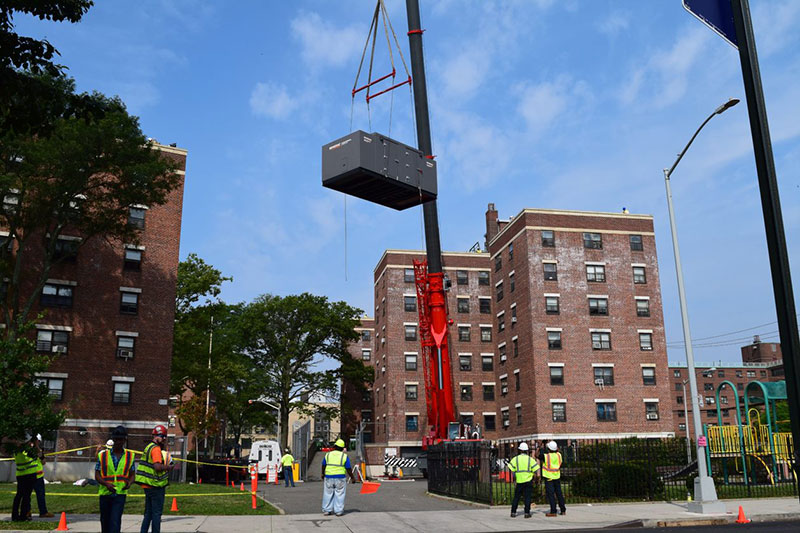 The scope of work is massive. The construction projects in the program range from a single site-constrained building to 30 buildings on 40 acres. Specific building characteristics also had to be considered, such as height above sea level, entrance location, structural integrity, permeability of the surrounding soils, and anticipated sea level rise and wave action. The Authority worked with its design teams to incorporate a menu of strategies across the portfolio. These structure and infrastructure protection options will become the design guidelines of tomorrow, both for NYCHA and for all property owners dealing with similar vulnerabilities.

While program implementation is still ongoing, there are already some critical lessons learned. For instance, the typical cost of repair or replacement may be too optimistic for older buildings that inevitably have other repair needs: It’s impossible to reap the full benefits of a new boiler if it’s plugged into an aging distribution system. The most successful disaster recovery designs will take these conditions into account, as funding allows. 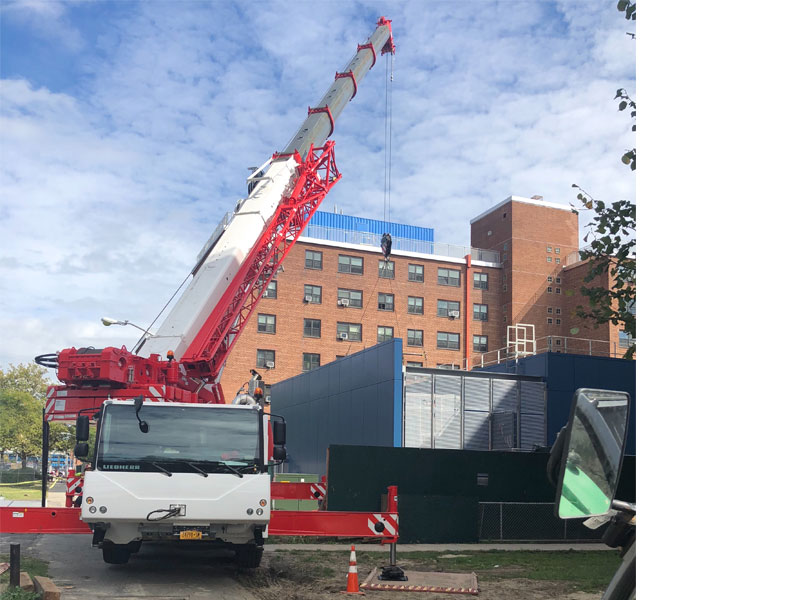 NYCHA also sought to take advantage of every resilience measure as an opportunity to solve multiple issues and improve residents’ quality of life. Façade reinforcement was a chance to beautify aging structures. Raised boiler buildings paved the way for new community and storage spaces. Conduit coverings incorporated wayfinding and building signage for residents and visitors. Surge protection allowed for the incorporation of seating and placemaking at developments in need of such spaces.
Communication has been, and will always continue to be, one of the most critical aspects of the program. It is not unusual for disaster recovery funding to take time to get authorized, and the standard procurement and design processes for structure and infrastructure are mysterious and lengthy to a layperson. On top of that, construction is disruptive. For these reasons, resident cooperation is key for a successful project.

Residents can, and should, be engaged on community needs and design preferences while the grant application is underway. Even with the most technical work, there are opportunities to incorporate community input. At Coney Island Houses, NYCHA presented residents with two options for the placement of a new boiler plant. One option saved the agency money by reusing an existing chimney flue but required the demolition of a beloved seating area. Residents chose that option and worked with NYCHA to incorporate a new seating area design that faces the water instead of a busy street.

Throughout construction, NYCHA community outreach team members – half of whom were NYCHA residents – contacted resident leaders at every development on a weekly basis to answer questions and address issues before they escalated. They attended every resident meeting and coordinated special community meetings at milestones in the design and construction process. The scope of work varied from site to site but often included significant trenching, foundation digging, utility outages, and other disruptions. Fliers, robocalls, door knocking, a direct phone number, email, and frequently updated website provided residents with many channels of information.

For many New York City residents, construction of resilience elements is new, and personal preparedness is not part of the culture. The technology, design, and building code is not familiar and neither are the appropriate expectations during deployment in the face of a storm. NYCHA spends a considerable amount of time communicating about why it is installing interstitial impermeable material between layers of brick façade or surrounding an entrance with partial walls and flood log frames to protect structure and infrastructure (which is so that residents who have evacuated can return home as soon as possible). Most importantly, the Capital Division works hand in hand with other NYCHA departments, including Operations and Emergency Management, to make sure that the capital investments will be maintained and deployed effectively, providing the intended protections for our residents.

While the work to protect NYCHA buildings from future storms continues, the Authority has made significant progress in achieving its recovery and resiliency goals. To date, NYCHA has awarded almost $3 billion of contracts, touching every site in the program and has spent over $1.5 billion. This hurricane season, three developments are ready to deploy flood panels, if needed. By the next hurricane season, 15 will be ready, and by the end of 2022, all 33 of the affected developments will be. Indeed, the largest housing authority in the nation is focused on making sure all of its buildings are protected against storm surge and sea level rise for generations.

Joy Sinderbrand manages the New York City Housing Authority’s Recovery and Resilience Department. The $3.2 billion program is both repairing lasting damage from Superstorm Sandy and investing in precedent-setting resilience elements protecting structure and infrastructure at 35 developments housing over 60,000 low-income New Yorkers. Her background in major capital projects includes Port Authority of New York and New Jersey efforts to increase capacity at New York’s Penn Station and redevelopment of the World Trade Center. Previously, she worked for Washington Square Partners developing public-private partnerships and for the City of New York at the Department of Transportation and the Office of Management and Budget. She holds a joint Master’s Degree in Public Affairs and Urban & Regional Planning from Princeton University and a Bachelor’s Degree from the University of Maryland Honors College. Joy is raising two 4th generation Brooklynites to love infrastructure investment and lets them use power tools solo while insisting Google requires adult supervision.