Transforming Jakarta into a Bike-Friendly City

Motorized vehicles have had their day. In Jakarta – one of the most congested cities in the world – residents are beginning to think about adapting their lifestyle and mindset towards other modes of transport. They dream about a Jakarta with cleaner air and more pleasant modes of transportation.

Okka Wiranata, Ria P. Istiana and I are colleagues. We met at Trisakti University in Jakarta, where were all studying for Bachelors in architecture. We remained friends after graduating. We usually ride bikes during Car Free Day every Sunday morning on some of Jakarta’s main roads. We see many cyclists during weekends, but rarely see them on weekdays.

Some people opt for biking in Jakarta as it can be quicker than navigating the city’s busy roads by car. However, others are deterred by the lack of facilities for bikers as well as safety hazards.

Our dream is for cycling to become a daily habit for all commuters in Jakarta. The challenge is how to support the cycling habit in a sustainable, fast and simple way.

The Obstacles to Cycling In Jakarta

About seven million citizens in Jakarta are between 15 to 64 years old – the age of the active commuter. They travel around Jakarta every day to reach their destination. Why don’t we persuade them to use a bicycle to get moving? Cycling in Jakarta is relatively convenient because the topography tends to be flat. It is not like subtropical climates where there are four seasons. The only obstacle that cyclists face in tropical climates such as Jakarta is the humid temperature, which causes excess perspiration, and occasional rain during five to six months per year. In Jakarta, cyclists do not have to face snow, ice, or other hazards found in colder climates.

However, one major challenge that Jakarta’s cyclists face is the noxious emissions from motor vehicles. There is also a lack of bike lanes and little shade, which can cause discomfort. These factors can put people off cycling.

We believe that if we made an effort to improve conditions for cyclists, we could help change the habits of Jakarta’s commuters and reduce the reliance of cars on our congested roads.

Laying the Foundations of a Cycle-Friendly City

One major step towards a cycle-friendly Jakarta would be the implementation of dedicated cycle lanes. While waiting for this to happen, we designed Cyclist Urban System (CUS). In Indonesian slang, the word ‘cus’ means “Let’s go!”

CUS is a one-stop-facility for cyclists, helping make their ride more pleasant and appealing. CUS offers a place to park bikes, clean up and get dressed after cycling. It also offers showers and toilets, a deposit counter (locker), vending machine for snacks and drinks, a medical kit, service for bike repairing, sales area for bike accessories, and even a bike sharing station.

Our mission is to encourage cycling to become a popular transport choice for near and intermediate distances. We aim to achieve this by facilitating cyclists’ basic needs. CUS’s presence will form the groundwork for a better bicycle network in the city.

We created CUS as an easy-to-install “hub”. We designed it for a unit or “module” which can be replicated throughougt the city. Each module made of a recycled container that can be placed in a parking lot. The smallest CUS unit only takes up three parking spaces (5 meters by 9 meters). It can also be designed for indoor spaces. 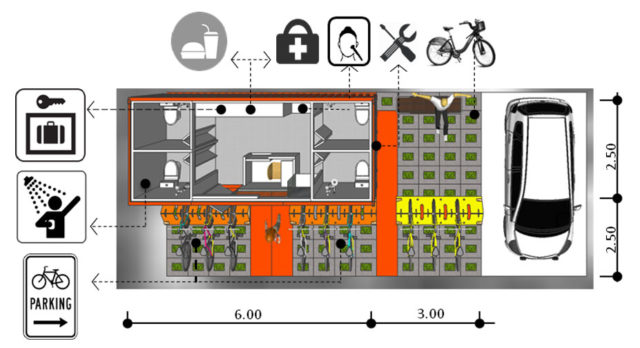 To make CUS independent and sustainable, we built a business system to support it. The CUS unit can be owned by anybody.  People who buy the CUS unit are also buying the franchise package.

There will be no business competition among CUS owners, because the system is designed to become more powerful as hubs proliferate. CUS hubs will be an attractive meeting point for the growing cyclist community in Jakarta. CUS hubs could also be potential magnets for advertising. This means that the owner could gain income from both users and commercial business.

Discussing the Future of Cycling with the Jakarta Governor 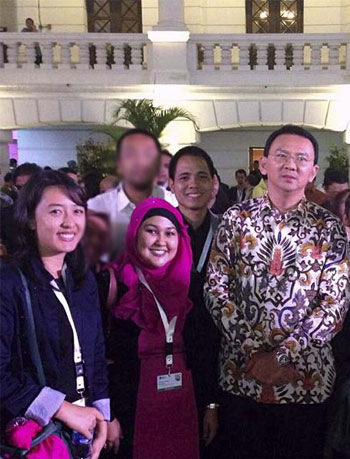 We conceived CUS after reading about the Jakarta Urban Challenge – a contest run by NewCities in Paris, calling for homegrown mobility solutions for the Indonesian capital. Having presented as one of the three finalists at the New Cities Summit on June 9, 2015, we were invited to discuss our idea in more detail with the Governor of Jakarta a week later.

After listening to our ideas and vision, the Governor explained that the City Government is also developing plans to promote walking and biking in Jakarta. He also told us that Jakarta is planning to install cycle lanes – and that CUS could be integrated into this new plan.

Now, our first mission is finalizing licensing and legal matters with the government, concerning the implementation of CUS. We will build one prototype so that citizens can experience the CUS facility and offer their feedback.

We plan a probation period of three months, and will evaluate every comment from the users. Our target is to launch the first CUS unit by March 2016. 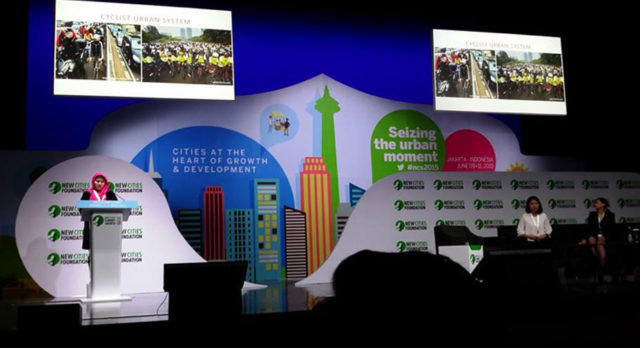 Towards a Cycle-Friendly Jakarta

We believe that CUS is a step in the right direction for our congested home city. In Jakarta, creating a bicycle-friendly culture will reduce congestion and air pollution and help foster more active lifestyles. It will also reduce fuel consumption and increase people’ssavings. In the long term, it will help combat global warming.

Finally, promoting cycling in Jakarta will help build a positive identity for the city and attract environmentally-friendly  tourism.

With CUS, we believe that all people in Jakarta will enjoy a better environment and quality of life in the future. We look forward to making this vision a reality.

Watch the finalists present at the New Cities Summit 2015

Khairunnisa Kautsar (Ucha) is Co-founder and CEO of Cyclist Urban System whose mission is to convert motorized vehicles to bicycles as a daily mode of transportation.