We’ve Got the Power! Why Citizens Should Claim Participation in Infrastructure Management

The German Energiewende (the transition to a low carbon sustainable energy system) is under pressure. The transition surged in the late 1990s and early 2000s due to innovative and far-reaching policies to support renewable energies, improved efficiency, and reduced consumption, resulting in the transformation of a large industrialized economy. Yet, once again, energy politics are now dominated by major utilities whose business models depend on fossil fuel economies. This puts the transformation of Germany’s energy system at risk – as a process that is both economically and environmentally crucial, this is a risk we can’t afford. What’s more, the voices of citizens are increasingly shut out from the decision-making process.

Citizen efforts represent a considerable contribution to renewable energy growth in Germany – in 2013, for example, renewable energy generated by citizens represented almost half of onshore renewable energy generation in the country. This contribution indicates a fundamental shift in the relationship between the individual and the networked infrastructures (energy, water, transportation etc.) that support everyday life. Previously, technical services such as energy provision and distribution were characterized by considerable structural distance between the provider and the customer and a hierarchy of knowledge and decision-making power regarding the underlying parameters of these infrastructure services. Citizens were excluded in the planning of energy services. They were reduced to consumers, exercising whatever little market power they had through the choice of supplier following market liberalization in the late 1990s.

Urban citizens are joining forces to become the German capital’s partner in owning and managing the local power grid.

Today, in Germany the ability to choose from currently over 1000 service providers in the electricity sector alone has strengthened the position of informed consumers. Still, this broad variety does not strengthen the role the citizen plays in the energy system. However, the Energiewende has now opened new pathways for citizens to participate in energy system transformation through direct action. Citizens gaining the ability to have a say in questions of energy distribution have caused a wave of remunicipalization of power grid management, as well as alternative forms of direct citizen participation in these services through citizen-owned co-operatives. BürgerEnergie Berlin is one example, with urban citizens joining forces to become the German capital’s partner in owning and managing the local low voltage power grid. 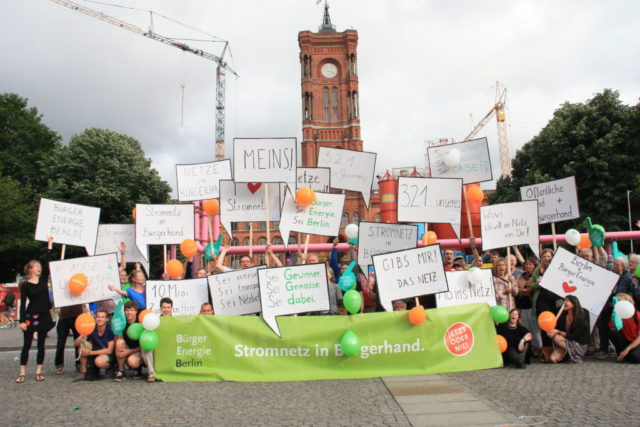 The target is threefold. First, low voltage power grids are the linchpin in the energy system transformation towards 100 per cent renewables. These power grids balance fluctuating supply and demand and provide new energy services based on load management, efficiency and reduced consumption. Proactive grid operations will decide whether to speed up on our road to sustainable energies or rather stick to business-as-usual models. Secondly, grid services are a natural monopoly, and are closely regulated by federal authorities. This creates a safe environment of investment and value creation. So far, this environment is rarely opened up to citizens but remains confined to strategic investors and utilities that have loose ties to local value creation and community benefit at best. A cooperative, instead, is an investment that enables individuals to contribute to the financing of their infrastructure. Lastly, the cooperative gives each member a voice, independent of his or her financial share, to speak and vote in the General Assembly on the management and strategic vision of the company. At a time when sustainable development and renewable energies are gaining stronger public support and a higher priority within communities, this is an important step towards enabling communities to lead development towards a green energy future.

BürgerEnergie Berlin is formally bidding for a partnership with the senate of Berlin in the on-going application process for a new grid operator. The municipal authority has the unique opportunity of engaging their citizens, sharing political and financial responsibility. The call of over 2000 members underscores the importance of citizens’ role in implementing 100 per cent renewable energy and challenges democratic institutions to engage their citizens directly in questions shaping their cities and towns: the ownership and management of fundamental infrastructures of modern urban life.

We must push for the decentralization of voice and finance – bringing the power to choose to our communities.

Decentralization is still a dominant paradigm in public debate on future proof energy. We must push for the decentralization of voice and finance – bringing the power to choose to our communities. Changing the structures of investment and decision-making in the management of networked infrastructures is an important step in this process. It is citizens, after all, whose daily lives are shaped by these infrastructures.

This blog is part of the 2016  Summit Blog Series. Luise spoke at the New Cities Summit on 21-23 June in Montréal, Canada.

Luise Neumann-Cosel is co-founder and CEO of BürgerEnergie Berlin eG. The citizen's cooperative aims to buy the local electricity grid. Luise holds a M.Sc. in Geoecology from the University of Potsdam, has worked as a research associate for the Berlin parliament as well as for several NGOs and is studying for a PhD on growth patterns of cooperatives at the University of Witten/Herdecke.

Arwen Colell studied comparative environmental and energy politics in Germany, Japan and the U.S. She worked on strategies for sustainable urban development for the Federal Ministry of the Environment and the integration of renewable energies and electric vehicles for a Berlin based start-up. Her PhD dissertation at the Environmental Policy Research Center Berlin focuses on identity and citizenship in community energy projects.