The future of cities – particularly small to medium sized ones – is networked, niche, global and connected. For many, it is about finding ways of making small things work and connecting distinct, dynamic local initiative, creativity and entrepreneurship.

In 2008, I started a project called Renew Newcastle in Australia. Newcastle, about two hours’ drive from Sydney, is a former steel and current coal town that had lost 20,000 jobs as the steel industry closed and other associated industries went with it. At the time there were more than 150 visibly empty shops and offices on the main streets. 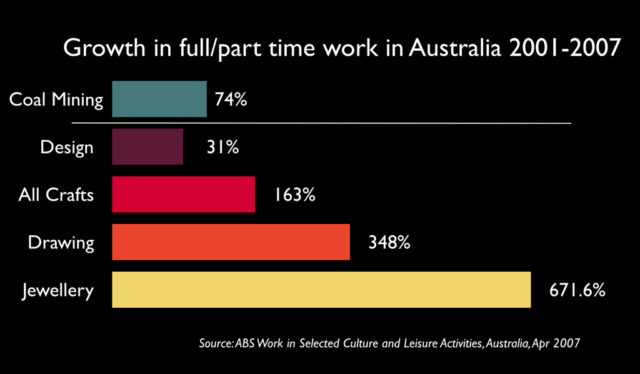 Our not-for-profit company began to broker and borrow those buildings from their private owners on the basis that they could have them back when they got a commercial offer. In the interim, our idea was to use these spaces to incubate experiments and ideas. Renew Newcastle managed compliance and provided umbrella insurance. In turn we lent these spaces to artists, artisans and designers of everything from dresses to digital code. We took ideas from the community who came forth and built coworking spaces, collaborative studios and fashion labels. Some flourished and started employing people, some failed; each contributed just a little to making the city a more interesting place.

Today, the vacancies have plummeted. Renew Newcastle itself has helped start 170 new community projects and creative small businesses. We have reopened more than 70 properties. New cafes, restaurants and businesses have moved in and reactivated a once failing city street. A whole new story has emerged. In 2011, Lonely Planet named Newcastle one of the top 10 cities in the world to visit. Today, Newcastle features in travel magazine features and strange lists of the world’s hippest cities. It is not perfect, but it has a growing, diverse and resilient local economy that has grown from our experiment.

Most of the time, the story of Renew Newcastle is told as one of main street revitalization. However, it is also the story of something else. It is a story about how technology can transform cities. The technology, in this case, is not digital tracking or high-tech urban infrastructure. It is something much more mundane, much less hyped and strangely invisible: the globalization of niche creative industries.

According to Australian government statistics, the number of professional or semi-professional jewellery makers in Australia grew by nearly 700 per cent in the last decade. Why? Let’s call it the “Etsy effect”, where small-scale creativity is a globalized business. According to the Etsy, which calls itself “the world’s most vibrant handmade marketplace”, about 70 per cent of Australian sales are international exports.

Through various platforms the same is true of photography, design, recorded music, publishing and fashion. Online marketplaces such as Etsy have led to an explosion of bedroom businesses and global industries operating from suburban garages. Most of this activity is small-scale, but given the right conditions, it can grow. Make something beautiful? Instagram it, hashtag it, share it and ship it. It’s happening all the time.

What Renew Newcastle has seeded are often these kinds of businesses: people who were exporters before they ever had a shop. People who are no longer reliant on the passing foot traffic of a failing street to build their business, but who can still actively help re-vitalize their local beighborhood. The scale and economics of viability in smaller cities and towns has completely changed. A wave of activity is possible that we did not imagine a few years ago.

Seeding this kind of activity has another advantage. It makes for distinctive, original, local places. I can wake up in a hotel, look out of the window, see a KFC, Starbucks or McDonalds and not be able to tell which continent I am in. Cities need to be somewhere, not anywhere again. Fostering unique, local creative activity is an engine that drives that better than anything.

This is why Lonely Planet told its readers to go to Newcastle. It’s why tourism to the city has grown by more than 25 per cent over the last few years. It’s why, according to visitors, the failed old high street mall that once had 20 vacant shops is now Newcastle’s second most popular tourist attraction, behind only its iconic beaches. This is because Newcastle is now home to unusual, homegrown businesses and products that cannot be found elsewhere.

One of Renew Newcastle’s little success stories is a small shop, a jeweller, called Studio Melt. Makers fabricate jewellery there and run classes. They stock items from dozens of local jewellers, as well as work from peers in other places in Australia and around the world. My personal favorite line is the collection of cufflinks, earrings and neckpieces made locally by artist Sophia Emmett. Her raw material is polished coal.

Marcus will speak in a panel session entitled Animating our Public Spaces at the New Cities Summit in Jakarta.
The panel is curated by the Global Cultural Districts Network.