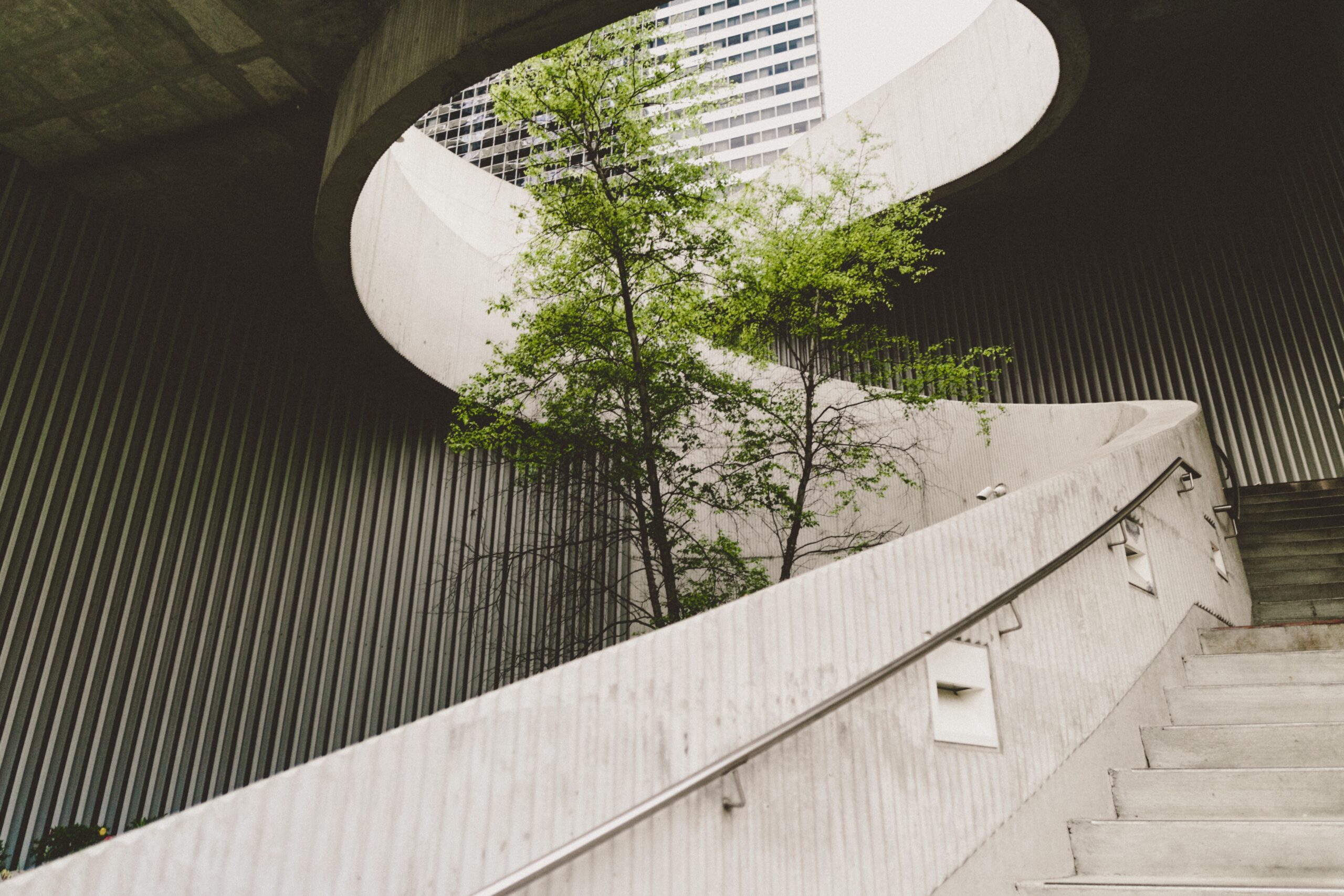 We had the pleasure of speaking with Andrea San Gil Leon, “one of Latin America’s important female figures working in transportation,” about her introduction to cities, the future of urban sustainability, gender-inclusivity, and her new ventures with the Global Partnership for Informal Transportation. – March 25, 2021

Q: Can you tell us a bit more about your interests in cities and how you came to found the Center for Urban Sustainability in Costa Rica?

A: I’ve always been passionate about nature, the environment, and reducing inequality. I started my career working on climate policy from the national level, trying to engage the corporate sector in taking part of Costa Rica’s Carbon Neutrality goal.

After a couple of years, I found that we were missing a level of action, at least in Costa Rica, when approaching sustainability and climate change, and that level of action was the sub-national level, cities. I also found that Costa Rica’s view on sustainability had traditionally been very much limited to just the green agenda. We had been very good in conservation practices, protecting forests and natural areas, but we were failing at the grey agenda, we were not looking at how to make cities, the places where most of our population lived, better, more liveable, resilient, inclusive or sustainable.

I became more and more convinced that working at the city level was one of the best ways to “ground” national level policies and escalate bottom-up efforts to reduce environmental impacts and improving quality of life for people.

Even though there were some emerging efforts and initiatives around city improvement, I couldn’t find one that had the same vision as I had, so I decided to start it myself. I had the luck of having two other wonderful women as Co-Founders as well, Natalia Morera and María José Gutierrez, and other people on our board that were willing to imagine different futures, co-create proposals, network and put in the work and passion that’s necessary to start an NGO from scratch and with no money. And I think that great leadership, innovative mindset and team work reflects on the culture of the organization that exists today, which makes me very proud.

Q: What do you see as the connection between sustainability and gender-inclusivity in cities and urban development?

A: When talking about sustainability, I often use the analogy of sustainability being like a 3-legged bench in which our world, our countries or cities sit in, and those 3 legs maintain a balance between social wellbeing and quality of life, economic prosperity, and a healthy environment. I think that analogy can help us understand that there is a deep connection between gender equality, cities and sustainability.

Finally, in the context of a climate crisis, we need to take urgent action to reduce emissions and make our cities more resilient. But in taking that action, we also need to take into consideration existing gender gaps to make climate action truly inclusive and generate positive impacts that contributes to different sustainable development goals (e.g #5 gender, #11 cities, and #13 climate). For instance, women are less likely to know how to ride a bike, so if we are trying to promote active transport, how are we going to include that half of the population? Women are less likely to own or drive cars, so, are we accompanying vehicle electrification efforts with other efforts to improve public transportation or walkability? And even going back to planning climate action, what is our city doing to determine and respond to the needs of women, particularly those that face additional vulnerabilities related to race, socio-economic background, legal status, etc? The connections are there, we just need to start identifying, measuring and responding to them.

Q: Cities have traditionally been built in the eyes of and designed primarily for the movement of men. In what ways do you think we can work with this existing infrastructure and make them more accessible and safe for women?

A: There are three key things that cities can do to change this:

– Include more women into planning and decision-making processes: This needs to happen in different levels, from generating gender-inclusive participatory spaces (e.g flexible hours, accessible via public transport, women-only spaces, offering childcare during these spaces, etc), to having gender parity selection criteria for technical teams or committees, to strengthening the participation of women in leadership positions or public office.

– Collect gender disaggregated data to inform policy, planning and design: For decades we have designed and planned services and spaces assuming that the male experience is universal and the standard. By starting to collect data that is disaggregated by gender (which provides for a wider spectrum of gender identities including trans women, or non binary people), or at least sex- disaggregated data, cities will be able to determine different needs, mobility patterns, preferences and behaviours that can inform more inclusive infrastructure design, planning, code and procedure adjustments, policies, etc.

– Include gender lens and criteria for every project: Rather than gender being an afterthought, applying tools such as gender auditing or gender budgeting to assess different city programmes, projects or plans is critical to ensure that they are contributing to close rather than deepen gender gaps.

Q: As a Policy Advisor to different ministries and an Environmental Engineer, what are some key lessons you’ve learned in your career?

A: – That asking “how can I help?” or “how can we solve this together?” opens more doors than “you’re doing this wrong.

– That I don’t have all the answers, but that I can find them by collaborating with others.

– That it will be difficult but you have to find like-minded people that also aspire for change and inspire you to keep going.

– That a systems approach helps see the connections between different projects, policies and plans, to avoid duplicating efforts and to maximize the potential impact of each of them.

Q: According to you, what policies have been most effective and have had the greatest impact on equity in communities?

A: Cities like Vienna, Reykjavík or Barcelona are great examples of the application of some of the different approaches I mentioned in question 3, and have achieved innovative projects, plans and policies that are improving cities while closing gender gaps. I’d also like to mention Medellín In Colombia, where by investing heavily in improving urban and transport infrastructure in the most vulnerable communities in their city, they have improved safety, reduced inequality and overall improved the dynamic of the city.

Q: What do you think the future of informal transportation will look like in the global south, and why does it matter?

A: I think it will continue to expand and exist as a response to the lack of coverage and adequate transport infrastructure that exists in our fast-growing cities, especially ones in Africa or Latin America where formal transport just can’t keep up with urban growth. I think it will continue to innovate and find solutions to keep reaching people, and these solutions will be increasingly linked to digitalization and IT.

However, technology won’t necessarily make a system smart, sustainable or inclusive, and therefore the way that these systems will evolve will really depend on whether our cities choose to implement policies and efforts towards integrating and recognizing the value of these systems, or continue to ignore or attempt to eradicate them. This matters because if cities choose the last options, they will continue to exclude and perpetuate the vulnerability of millions of people that use these transport solutions because they have no other/no better choice, and of those for which this is the base of their livelihoods. In a time where we don’t have the time or resources to tend to different crises separately, addressing informal transport and integrating it into city and transport planning is an opportunity to reduce social, gender and economic inequality while at the same time improving urban mobility and if done well, even reducing emissions.

Q: What are you most excited about with the GPIT initiative?

A: I’m very excited about elevating the narrative about this type of transportation and how deeply integrated it is to the life of people, the urban dynamics and the economies of cities in the Global South. Often times global conversations are dominated by voices, narratives, realities and contexts of the Global North, and therefore solutions and best practices can often ignore the needs and realities of a different context, leading to potential failures or negative impacts in their implementation.

I think the Global South is an enormous source of valuable knowledge and innovation that is often overlooked or unknown and this is an opportunity to have a discussion on how we can find, document, and mobilize investment and support to solutions and best practices that are happening in our cities, and that really respond to our context.

Q: Is there an initiative or project you discovered recently that made you hopeful about the future of urban sustainability?

A: Maybe not that recent, but I’ve been really inspired by the work being done by initiatives trying to link nature based solutions, biodiversity and cities. I really love the Naturvation project in EU and in Costa Rica there is a local effort called Biodiver-City which is working in the natural river corridors of the Great Metropolitan Area. As a lover of nature AND cities, I could never understand why we tended to keep both things so separate. I love that recently there are more and more efforts to understand cities as ecosystems too and try to blur the lines between the green and the grey. Moving towards more biodiverse and colourful (not only green!) cities can bring so many benefits in terms of health, air and water quality, wellbeing, climate resilience, etc, that I think it can be very powerful and transformative to finally make these changes.