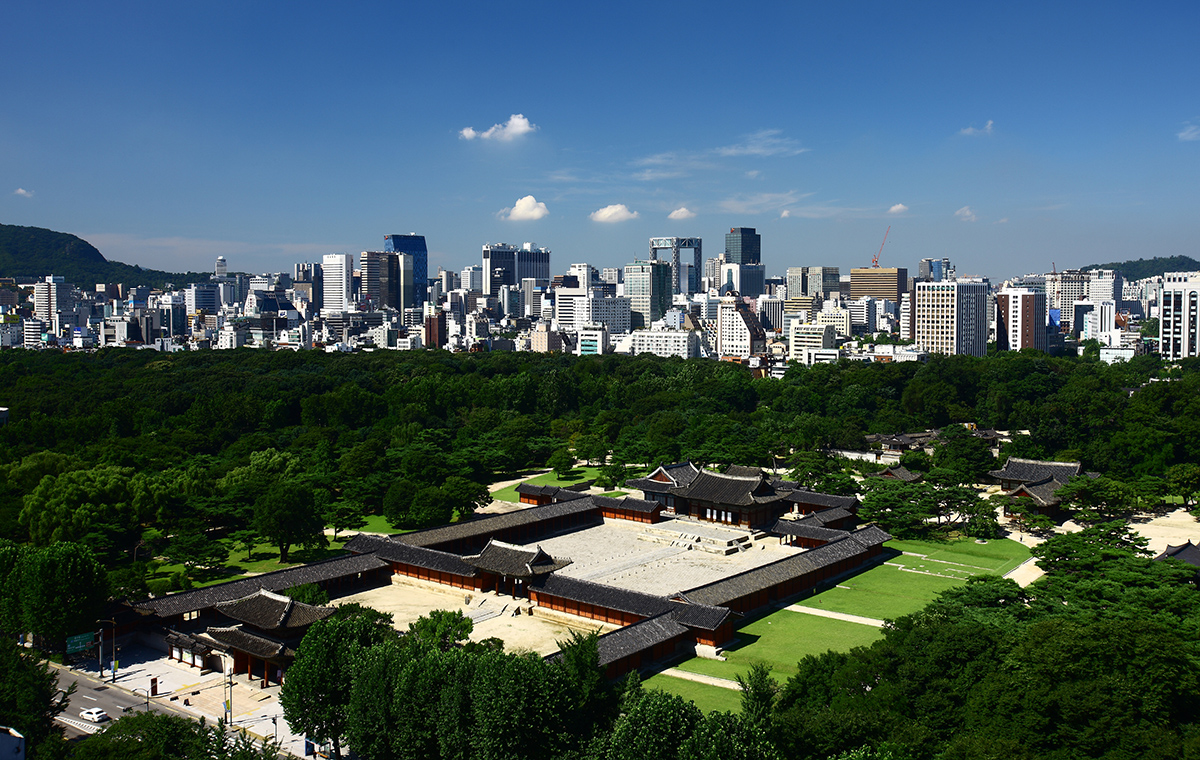 A metropolis with a population of more than 10 million, Seoul is a city that offers contrasting landscapes that combine traditional and contemporary styles, including its more than 600-year-old historic districts and 25 self-governing boroughs and their busy centers that seem to never sleep. Most of the city’s residential neighborhoods are situated within only 200 to 1,000 meters of innumerable hills, mountains, streams, and rivers and are all connected by the 157-kilometer-long Dulle-gil Trail that encircles Seoul, offering eight courses along which citizens can take scenic walks around the city.

In the early 1950s, the Korean War caused Seoul to lose over half of its population, which was 1.6 million at the time. However, the postwar reconstruction and industrialization drive profoundly transformed the devastated city, raising its GDP per capita from USD 95 in 1961 to USD 30,000 today. With the onset of the global financial crisis in 2008, the pace of economic growth and urban development in Seoul slowed, setting it on a path to low growth and stagnation.

Amid this slower pace of development, we have begun noticing things that had been neglected until recently. We realized that we had zealously pursued development at the cost of our lush, green mountains and clear, pristine rivers. The grand promise of economic development “for the good of all” had been built upon the incredible sacrifices of individuals, leading communities to collapse amid rising fear and discomfort, and neighbors to lose trust in each other. Personal happiness became unattainable for individuals living in urban spaces, as they had sacrificed it for the realization of outward growth. It was our reflection upon everything we have lost in our race toward growth that triggered this current era of urban regeneration in Seoul.

After 2010, “regeneration” began to feature as a main focus of Seoul’s urban policy. Today, urban regeneration projects of varying scales are being carried out at 131 locations across the city. To ensure that local communities are able to preserve the cherished memories they have accumulated over time and achieve further development in the future, it is critical that the people living in those communities participate in regeneration projects together.

The three main slogans guiding Seoul’s vision for urban regeneration over the next decade are “Making Together,” “Living Well Together,” and “Being Happy Together.” Under this vision, Seoul is striving to introduce and undertake projects that bring residents, experts, and civil servants together with the aim of strengthening the sustainability of urban communities. Instead of trying to tackle local problems through administrative intervention, we are now seeking to resolve local issues and strengthen the capability of local civil society by facilitating communication among residents, experts, and the civil service.

Our endeavor requires the development of programs and venues that motivate residents to participate and engage in systematic activities. To catalyze such participation-based urban regeneration, Seoul Metropolitan Government has established Urban Regeneration Support Centers in areas where major regeneration projects are being carried out. The 190 or so regeneration coordinators working at the 22 Urban Regeneration Support Centers in operation today serve as bridges of communication between ordinary citizens and government agencies. The central role of these coordinators is to plan and implement a wide range of participation-based urban regeneration programs that bring residents together and encourage them to interact with one another, as trust and rapport are built through face-to-face discussions and time spent together. Residents are also invited to share their opinions on how their communities can be improved and brainstorm together to find new ideas.

Meanwhile, Seoul has not forgotten the importance of online channels of communication. As one of the most wired countries on the planet, South Korea offers a digital environment that is strongly supportive of communication among citizens. With 91 percent of the Korean population now using smartphones, almost everyone has easy access to the Internet and social media. It is commonplace in Korea for public opinions and sentiments to be expressed via online channels, through which they become ideas or practices that exert significant impacts on the real world.

For example, the Mail to Mayor channel featured on the main page of Seoul’s website enables any citizen to send an email to the mayor of Seoul, while Haptic Seoul, a smartphone application, allows citizens to check the state of civil affairs in the city at any time, regardless of where they may be. Seoul also provides “card news” updates, featuring infographics, as a way of sharing the latest updates on the urban regeneration projects underway across Seoul. Citizens are also encouraged to participate by taking quizzes and opinion polls, competing in public idea contests, and expressing their opinions via online channels.

Councils and committees are powerful platforms through which cooperative intelligence is increased by requiring members to act together in a responsible manner. Social media and the Internet, on the other hand, are far more accessible to the general public and encourage citizens to participate freely, thus realizing collective intelligence. As its next major task, Seoul is focused on the development of online platforms as a means of inducing the participation of citizens through playful features and activities.

Such technology-based spaces will become sources of an infinite supply of ideas, some of which will gain popular approval for their potential to dramatically transform communities. Seoul’s policymakers believe that real change and improvements will be made as citizens begin gathering together to mingle and socialize, people’s sense of self is expanded to include their communities, and residents’ concern with their own backyards is broadened to include public parks. Seoul’s bright future is something that every citizen must shape together through participation and engagement.